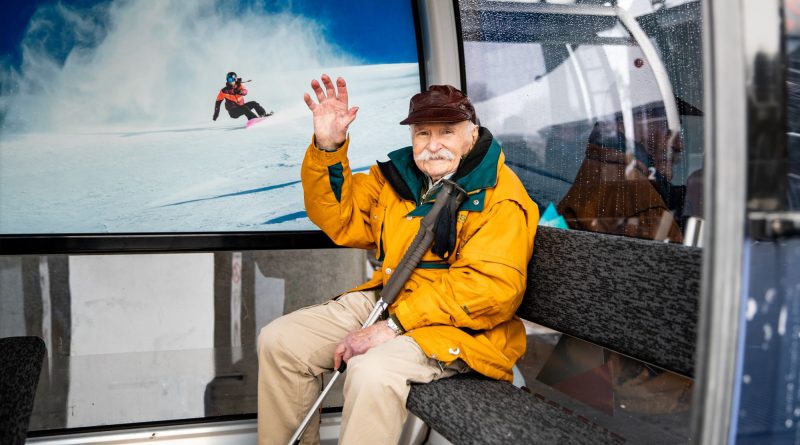 When ‘The Tors’ run was re-named Frank’s Face at Thredbo today, it is in honour of Thredbo resident and Australia’s oldest living Olympian Frank Prihoda as he celebrates his 99th birthday. But this is just the ski tip of an incredible story.

The intermediate run from Australia’s highest lifted point is sandwiched between Karel’s T Bar and Sasha’s Schuss, named after Frank’s brother-in-law, Karel Nekvapil and his sister Sasha (who married Nevkapil). “Having the Frank’s Face trail located between Karel’s T-bar and Sasha’s Schuss gives me great pleasure and feels like family,” says Prihoda.

And while he was planning to celebrate today with “just a low key gathering with my close friends,” opting for a small cake ceremony, glass of champagne and maybe a few nibbles, his legacy and community contribution is being recognised. “I feel especially honoured….it’s something which I don’t quite know how to express” says Prihoda of the run’s new name. “It confirms my connection with Thredbo, my love for this place and my long term residence. It is just such an honour”.

FROM EUROPE TO AUSTRALIA

The story of this Czech influence in Thredbo began over 70 years ago, when a young Frank fled the former Czechoslovakia and the communist regime. With him was Karel, and later in 1949 his sister Sasha, a ski team member of the communist Czechoslovakian Ski Federation who found her chance to slip away after a Swiss race meet.

Adding to Thredbo’s deep European links is Tony Sponar, who borrowed Prihoda’s Jeep to escape to St Anton in Austria (namesake of Sponar’s T Bar). Reunited in the Arlberg, the trio were integral to the development of skiing in Thredbo and importing the Arlberg technique, the blueprint of many ski schools worldwide.

Frank continued his alpine love after landing in Australia, his sister luring him from Melbourne in 1974. “My sister Sasha and her husband were running a lodge here – Sasha’s lodge, the second ever commercial lodge in Thredbo. Consequently I had a connection to Thredbo and for me it was a place I wanted to be. I love the place, the atmosphere, the skiing and the winter.”

AN OLYMPIAN AND FACE OF THREDBO

Having competed in the Winter Olympics in Cortina in 1956, Prihoda has also recently been awarded the Snow Medal Australia, a new award from June 2020 to recognise Australians at the highest level of winter sport. In 2014 Frank was also named as one of the Faces of Thredbo, along with his sister and brother-in-law, for significant contributions to skiing and making Thredbo what it is today.

Today his hope is that other’s feel his love for his mountain home. “I wish for Thredbo to prosper and to get over the difficult challenges that it has encountered with the bushfires and now the pandemic. It would be nice for heaven to be kind to us now and send us a lot of snow so Thredbo can give all its visitors the experience they would like.”