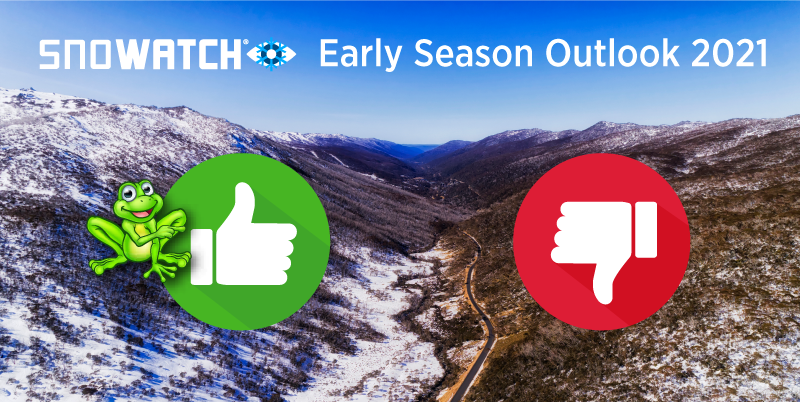 It is that time again when we look towards a coming snow season in the hope that things will be better than the last, which was a bit of a nightmare. Besides COVID closing the Victorian resorts last year and seeing the NSW resorts operating at 50% capacity the snow depth itself was also very disappointing.  With so much uncertainty leading into the season snowmaking was not able to begin as early as it would normally, so resorts were behind the eight ball when they finally got the go ahead to open. Natural snowfalls were scarce and the max depth in NSW was recorded at Spencer’s Creek at 167.8cm on August 27th, and with that reading taken up around 1700m it was much less low down, especially from mid mountain at Thredbo.

All resorts (apart from Selwyn Snow Resort which is still to be rebuilt after bushfires burnt it to the ground) are planning on opening, but again it will be on a limited scale due to COVID and social distancing. The reason the mountains limitations are a stricter than say going to the MCG or SCG for footy are that the virus spreads more rapidly in colder temperatures. As per last season I’m told you will still be required to use face coverings, which shouldn’t be an issue as it worked fine for those who skied or boarded last year.

Since the drought ended, we have been in a strong La Nina weather pattern which brings above average rainfall and slightly warmer temps. That pattern has since eased a little and we are in an ENSO neutral pattern which I see as a positive. The Bureau of Meteorology (BOM) released their climate overview on April 22 and below are some things to note for the early part of Season 2021:

These scenarios would normally mean that we will see limited opportunities for snow making leading into the opening weekend. What I see is that we will still see periods of cold clear nights in the mountains that will allow for the snow guns to operate as large high pressure systems sit over the SE of the country. Mt Buller has its ‘SnowFactory’ machine already pumping out snow at positive temps, building a stockpile of snow on Bourke Street to be spread out prior to opening weekend.

The ENSO Neutral phase to me is a positive going by past season’s that have begun in this phase. The chance of some early snow is quite high once we see a break in the dominating high pressure systems that are usual for this time of the year.

So when will it snow?

A weak cool change on the 3rd of May could see some light snow falling about the peaks, nothing to get too excited about though. Things are looking better a bit further out where I see a stronger colder system due to arrive in the mountains around the 11th-13th of May. I really like the positioning of this system, just hope the highs don’t strengthen and force these south. If this comes off it may well help the snowmakers to create a base even though we are still a month out from season opening on the 12th of June.

Looking even further out I also like the look of a strong system that should arrive around the 19th-23rd of May.

The one thing that could ruin these calls are if the high pressure systems revolving around the southern hemisphere increase in strength over the next month and force these systems south, which you would normally expect at this time of year. There is a small positive with that in that we would see more cold clear nights for the snow guns to fire up.

So to sum things up I see a pretty good start to the early part leading into the opening weekend. I’ll of course keep updating things on Snowatch® and it won’t be too soon until I should be able to post what I think is in store for the opening weekend. If I had to stick my neck out, I would say we have a good chance of a decent season with consistent snowfalls.

The daily forecasts with 15 day forecasts for each resort as well as the long range outlook will start on tomorrow on May 1st.

Snowatch.com.au is Australia’s longest running dedicated snow forecasting website. Owned and operated by Pete ‘The Frog’ Taylor it is well known for pinpointing snow bearing systems up to four weeks out. Unlike other weather sites Snowatch® does not rely on automated algorithms to pump out snowfall predictions. Pete ‘The Frog’ is up early six days a week from May 1st through to closing weekend in October studying the charts and data before manually inputting forecasts for each resort for the next 15 days as well as adding his thoughts on the long rang outlook. Pete ‘The Frog’ also helps out fellow Snowatcher’s answering emails and facebook messages in regards to queries on coming snowfalls. There is also a 7 day forecast for the New Zealand snowfields around Queenstown and Wanaka for the Aussies who like to keep an eye out over the ditch.